Trekking To Annapurna During Different Seasons

The best time to go on the most of the destinations for Trek in Nepal is in the spring (from March until May) and autumn (from September to mid-December). The trail, visibility, and weather conditions of these seasons are extremely supportive. The path gets slippery during Monsoon season and clouds obstruct the views. In winter, however, the cold and snowfall are harder.

Here's the detailed breaking down of what trekking to Annapurna region in different seasons would be like. 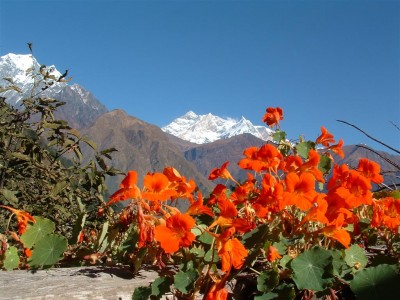 The local spring season is the second best trek season in Nepal, including the Annapurna Base Camp.

Spring will be falling in the months from March to May in Nepal. The winter comes to an end around mid-February. The days are beginning to get warmer. The weather, the climate, and the temperature during the spring are just perfect for hiking here.

During the day, the temperature varies between 17-20 degrees Celsius. The nights and the early mornings are a little colder. In the upper regions of the trek, the weather and temperature are getting colder.

The forests in the Annapurna regions are starting to come alive in the spring. Forests and flowers begin to bloom in the lower regions.

The lower parts of the trails are covered by pink, white and red rhododendron and wildflowers. The pine forests surrounding bamboo are lush green on the trails. In this season, you can enjoy the best of nature.

It's also a wonderful time to see wilderness such as white Langurs, monkeys, the Himalayan Tahr, musk deer. And you will be fascinated by the numerous bird species in the wood.

You'll see the lovely snowy mountains during the season. The day and night are light and dry, giving great visibility. The surrounding countryside, villages, rivers and gorges are also unbelievably viewable.

Make sure you book it all in advance. And otherwise you would have to struggle to get good and enough food and clean quarters. It's a wet summer in Nepal. The summer is hot, damp days and heavy rain and thunderstorms.

The summer months in Nepal are between June and August. This season is partly affected by the areas in and around Annapurna Base Camp.

The Annapurna Region is located in the mountain's rain shadow. This is a significant reason why in this region the monsoon is not significantly affected.

During this season most of the tea houses remain open.

The schedule in Nepal is a great thing about the monsoons. It happens mostly late at night and in the afternoon. Clean and sunny in the morning until midday.

The timing for monsoons in Nepal is great. It usually takes place late in the night and in the evening. From morning to midday clean and sunny. On clear days, temperatures range from 20 to 25 degrees centigrade. Higher temperatures of 20 degrees Celsius occur in the lower regions of the treks. You will see in full glory the rivers, dams, cascades and streams along the path.

In this season you can enjoy the splendor of the nature of Mother. However, in the rain-shadow regions of Nepal, you don't really like the rain, there are some fantastic trekking trails. The Upper Mustang Trek, Lower Dolpo Trek are amongst the suggested ones.

During this season, hikers and travelers are not overwhelmingly crowded in the trekking routes. This helps you to make your own choice. During your trip, you can explore the trails, choose the best tea houses and dining options. Fall is Nepal's best time to trek, including the base camp trek to Annapurna. All is perfect for trekking about this season. The local autumn season in Nepal is September, October and November. Amazing visibility due to clear weather.

The breathtaking views of the mountains and valleys are magnificent during this season. During the day, the temperature ranges from 15 to 17 degrees C. It fall to 7-9 degrees Celsius in the evenings.

The trails are less dusty in the lower regions. The trails start to dry slowly as the monsoon has just passed. The forest, flora and fauna are all beautiful and luxuriant.

You should look around the environment at your walks with a calming way.

At your resting points, tea houses and early morning treks you can also enjoy incredible sunrises and sunsets.

Autumn is perfect everywhere. The weather is more stable and the temperature can enjoy long and cool days.

The treks are the highest season and are crowded with hikers and tourists on the trails, tea houses and cafes. Make sure that you are on a safer side before booking your own.

The weather can change dramatically in the upper areas of the hike. Clear weather will turn into foggy conditions. Get prepared with the right equipment and gear. Nepal will be wintering between December and February. The temperature varies greatly because of the difference in altitudes and landscapes. In the same trek in the same season you can see this.

You can start your journey in a cool winter, including Katmandu and Pokhara. During the day, the temperature ranges from 9-17 ° C.

The winter weather conditions differ from the location where your actual walk starts to your destination.

On the paths to the Annapurna base camp it gets cooler. The day and night are particularly cool. During these times the temperatures fall to negative Celsius.

The days with temperatures from 2 to 6 degrees Celsius are much colder. Snowfall is also seen in some of the upper regions of the walk. Many high passes in the area such as Thorong La Pass are inaccessible to security regions.

In winter, the region of Annapurna has a desolate, snowy feel. During the season, most local people migrate to the lower regions.

But it may be the perfect season for you to walk to Annapurna Base Camp if you like cold and snow. And this trek should be spectacular with proper preparation, equipment and supplies.

The views of snow-capped mountains and mountain tops are breathtaking. In fact, in the upper snow-covered areas, you can also see the village buildings. He makes the Christmas cards lovely and picturesque.

The trails are always there for you. Most tea and coffee houses close the season. Some of them remain open all year long. Make sure to check your reservation in advance with your cafés and tea rooms.

The tea houses have heated fireplaces, blankets, warm drinks, and broth for cold battle. If you would like to climb the smaller peaks or passes in this region during this season, some alpine or mountain climbing experience is great.

You get magnificent views of snow-capped landscapes and mountain peaks. Along with these, you can also see the village houses in the upper regions covered by snow. It makes for wonderful, picturesque Christmas cards.

You will also have the trails for yourself. Most of the tea houses and cafes do close for the season. There are some that remain open throughout the year. Be sure to confirm your booking with your tea houses, cafes in advance.

The tea houses offer you warm fireplaces, blankets, hot water, and soup to help combat the cold. Some alpine or mountain climbing experience would be great if you want to climb the smaller peaks or passes in this region during this season.

Other Months of the Year

Early February still sees some signs of winter. You may get to enjoy the occasional snowfall in the upper regions of the trek. The temperatures are just starting to rise. So, you may be in for a chilly morning or night during early February.

By Mid-February, spring sets in and you get the full benefits of the spring season.

In early September, some signs of monsoons can be seen. You may experience rainfall and thunderstorm from time to time.

Finally from the middle of September autumn sets. The weather and temperature start cooling and stabilizing. It is calm, warm and dry during the summer. During the beginning of December you can still experience the last traces of autumn. Winter somehow didn't slow down. Thus, the temperature is not negative. In early December you can take advantage of the trails freely and comfortably.

At the beginning of June weather and temperature remain in the remaining spring season.

Most trekkers will be leaving by May. In early June, you can enjoy the quiet and calm paths at your own pace. The summer season (monsoon) will have ended by mid-June.

These months are in themselves an adventure. You can see what is best and worst in the season. During these months, there are fewer walking trails to Annapurna Base Camp and surrounding trekking destinations like Poonhill, Annapurna Circuit Trek, Mardi Himal Trek, Annapurna Ghorepani trek, Jomsom Muktinath Trek and Upper Mustang Trek. These are great months for you to hike, if you're up to it.

Nepal has various cultures. Nepal. There live in harmony numerous ethnic groups and individuals with different religion. This is why Nepal loves various festivals all year round.

Festivals offer you the chance to explore and to indulge the local people's culture and lifestyles.

You will taste the full beauty of local culture. The locals come with their best clothing and jewels. Songs, prayers, drama and dance are celebrated in the festivals.

The color festivals 'Holi' can be seen in the bright and beautiful spring season. The New Year will also be held in Nepal during this season.

During the summer there are colorful and pleasant festivals such as Gai Jatra, Janai Purnima or Teej.

• In commemoration of the loved ones lost in the year, Gai Jatra is celebrated. In current days, parades of the LGBT community in Nepal are still observed.

• Teej's a women's festival. For one day, they dance and quickly. You are also praying for blessings to Lord Shiva. Person women pray for an acceptable match.

Tihar is the lights' festival. In colorful lights you can see the whole nation.

In winter, in some of the remote parts of Nepal, you can enjoy a snowy Christmas and New Year.

Tamu Loshar, Gyalpo Losar, Easter and Mageshangrati are also observed by the people of Annapurna. Losar in the local dialect means New Year.

Tamu Loshar is celebrated by the local Gurung community in various areas of Nepal. Big regions such as Jomsom, Mustang, Manang celebrate Gyalpo Losar. Gyalpo Losar. The locals in their traditional clothes can be seen. They visit monasteries and enjoy group sites in their homes.